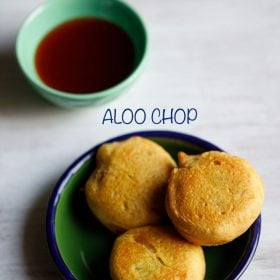 Aloo chop recipe with step by step pics. Aloo chop or alur chop is a delicious Bengali fried snack and made in the same way a Batata vada or Potato bonda is made. Just the spices and herbs added in the potato stuffing are different. It is not just a scrumptious Bengali snack, but a gluten free and vegan friendly recipe too.

What is Alur Chop

To begin with, the literal translation of the Bengali term Alur Chop:

Alur – Alu/aloo meaning potato, with the suffix ‘-r’ meaning ‘of’

Chop – This is not when you chop vegetables, but a small cutlet/croquette/fritter in the Bengali language

The Aloo Chop is also a famous street side snack in Kolkata, and a favorite during Durga Puja festivities when the food stalls in pandals sell them in all their glory. At such times, it is traditionally served with kasundi (a typical Bengali mustard sauce), salads, green chilies and even muri or puffed rice.

Aloo Chop recipe has a close resemblance to its North Indian counterpart, the Aloo Tikki. Also, besides being an integral part of the food culture of West Bengal, it is also popular in Odisha, Bihar, Jharkhand and…