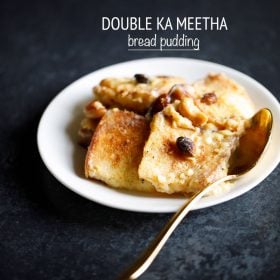 Double ka meetha recipe with step by step photos. This is an easy and delicious recipe of Hyderabadi style double ka meetha made with sweetened condensed milk. Being very true to its name, the Double Ka Meetha is a dessert that will actually double your happiness and satisfaction, as soon as you’ll take a bite of it!

Though both shahi tukda and double ka meetha are supposed to be the name of the same dessert, but actually they are not. There are a few variations in the cooking method, which makes double ka meetha taste different than Shahi tukda in terms of overall texture and flavor.

I wanted to share double ka meetha recipe for a long time. I have been making this recipe adapted from Milkmaid website for quite some time. Usually when I have leftover bread slices I end up making this sweet dessert.

This recipe method is an easy and albeit quick version of double ka meetha. Here condensed milk is used to replace Rabri or thickened milk. Hence…